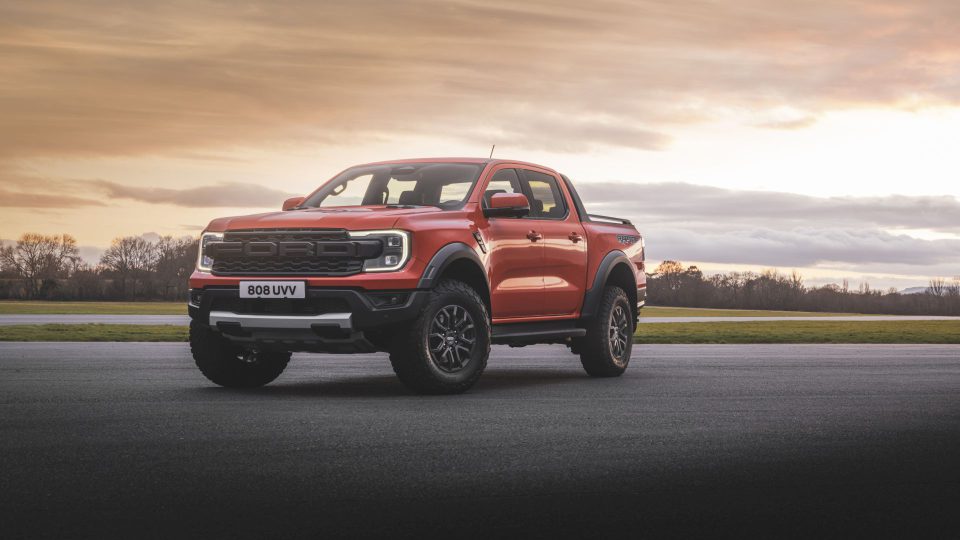 This is the new Ford Ranger Raptor

According to Ford, this is the most advanced Ranger ever. “We wanted to make the new Ranger Raptor a decidedly sporty and powerful pickup,” said Dave Burn, Ford Performance chief program engineer for the Raptor. “It’s significantly faster than previous versions, looks great and is full of new features. It’s the toughest Ranger we’ve ever developed.”

The ‘Raptor’ label is applied by Ford to its high-performance pickups and SUVs, with the 2010 Ford F-150 SVT Raptor being the first model. The bad ass Raptor models are specially made for high speed off-roading. The cars were initially only intended for the American market, but due to high demand, Ford later brought the Ranger Raptor to Europe.

This second generation Ranger Raptor is also coming to Europe, and is available with two different engines. A big 3.0-liter EcoBoost V6 petrol engine with two turbos, which is good for 288 hp and 491 Nm. The engine is mated to a ten-speed automatic transmission. From 2023, the Ranger Raptor can also be ordered with a twin-turbo 2.0-liter diesel engine.

Ford builds the new engine around a graphite-iron cylinder block and is approximately 75 percent stronger and up to 75 percent stiffer than the iron used in traditional castings. Ford Performance ensures that the new Ranger Raptor is very directly on the gas. They do this using technology derived from racing, similar to the system from the Ford GT and the Focus ST.

This so-called anti-lag system keeps the turbochargers running for up to three seconds after the driver releases the throttle. This provides instant power to accelerate out of a corner, without a dip in delivery.

Choose your own exhaust sound

With a button on the steering wheel you can make the Ranger Raptor sound the way you want it. There are four modes to choose from. In order from soft to loud: Quit, Normal, Sport and Baja. According to Ford, the latter is like driving without a damper. The neighbors will be happy.

To ensure that the Raptor feels like a fish in the water in the unpaved terrain, Ford has made a number of changes to the chassis. There are several reinforcements that are specific to the Raptor and that you will not find on the regular Rangers. These reinforcements are in the C-pillar, cargo bed and spare wheel, as well as unique frames for the bumper, shock absorber tower and rear shock absorber bracket.

New suspension for the Ranger Raptor

The chassis is an essential part for sportiness. That is why the wheel suspension has been completely redesigned. They have become stronger, but also lighter. That’s because aluminum is used for the upper and lower wishbones. The suspension travel has also become longer and the Watt-link linkage has been used for the rear suspension. Go big or go home, they must have thought at Ford, because the new generation of FOX ® Live Valve dampers are the largest Ford has ever used in the Raptor. The dampers contain a mixture of oil and Teflon™ to reduce internal friction by 50% compared to the outgoing model.

If you can hit harder with the Raptor, it should also be better protected. That is why Ford has provided the Ranger Raptor with the necessary protection. The skid plate under the front is almost twice the size of that under the normal Ranger and is made of 2.3 mm thick steel. All to ensure that essential components of the car remain protected, such as the radiator and steering, for example.

For the first time, the Ford Ranger Raptor has permanent four-wheel drive. This with an all-new, electronically controlled two-stage transfer case. In addition, the Ranger Raptor gets Trail Control, a kind of cruise control for the terrain. That works up to 32 km/h. There are also various driving modes, so that the right settings are active in every circumstance. There is a choice of seven modes to be exact, three for the asphalt and four for off-road.

The new Ranger is of course used as a basis. But as happened with the previous models, Ford makes the Raptor even thicker. The wide wheel arches, rims and the wide grille with the headlights all the way to the outer sides of the front make the car wide and muscular. The 17-inch rims are surrounded by all-terrain tires specially developed for the Raptor. The non-slip footboards made of cast aluminum are located between the wheels. The rear bumper has an integrated step and the taillights are integrated with the headlights.

What immediately stands out on the inside are the sports seats, the interior lighting and the large 12.1-inch infotainment system. You also get a heated sports steering wheel and shift paddles made of cast magnesium. The counters behind it are digital and are shown on a 12.4-inch display. In addition, the car is suitable for wireless Apple CarPlay and Android Auto. A B&O audio system with ten speakers should provide excellent sound if you don’t want to hear the V6 for a while.

The new Ranger Raptor will undoubtedly become a popular car to put on a gray license plate. The Ranger Raptor can be converted for the Dutch market to meet those requirements. Prices before tax are 54,700 euros for the 3.0-litre EcoBoost V6 petrol engine and 52,350 euros for the diesel Raptor. The price after tax will be announced later.