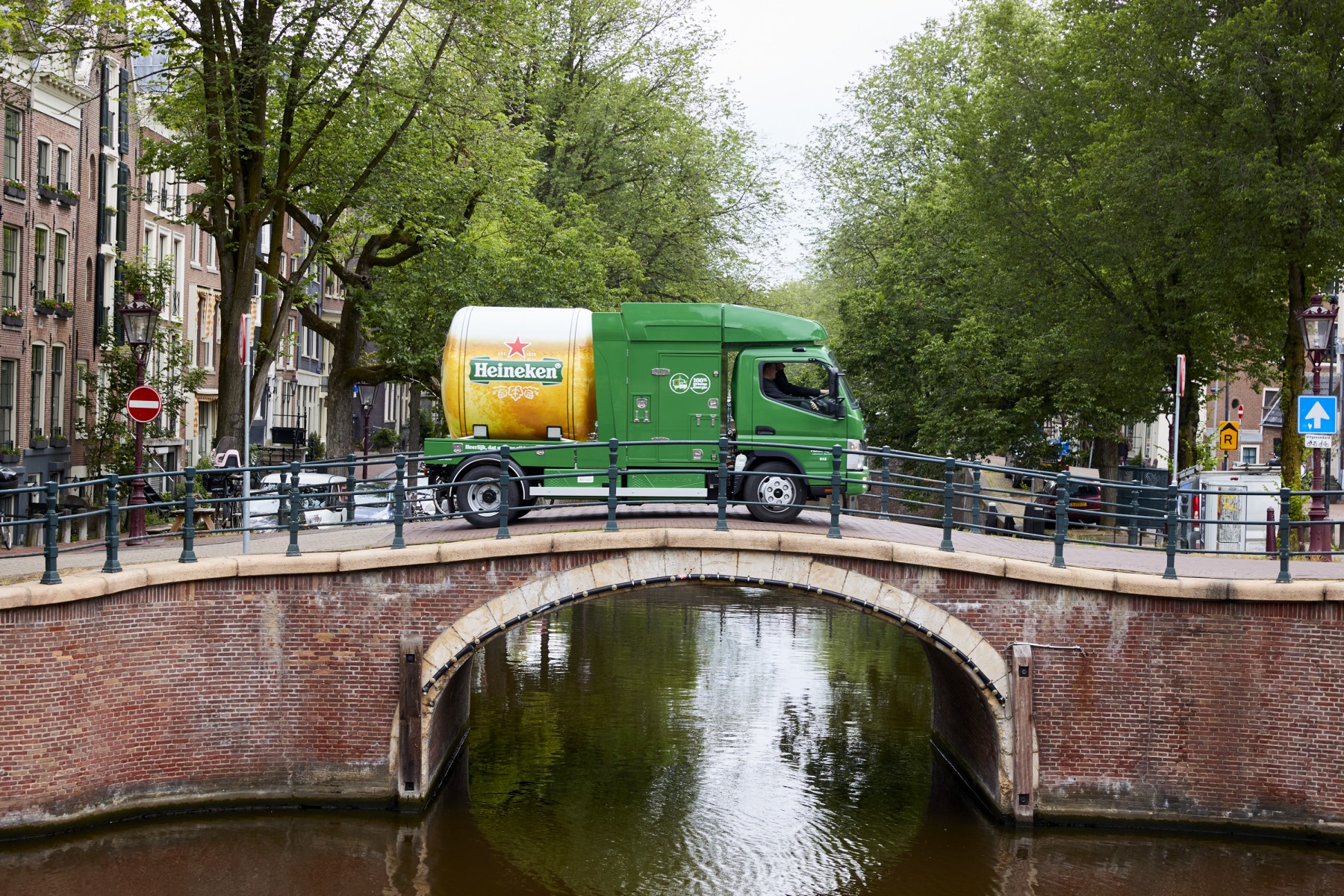 Since last summer, Heineken has been supplying cafes in the center of Amsterdam with the very first 100% electrically powered mini beer tankers in the world. Due to the closure of the catering industry, the electric beer tankers have recently been less active in the city center. During the corona press conference on 25-1-2022, Prime Minister Mark Rutte announced that from 26-1-2022 the catering industry can receive guests again from 5 a.m. to 10 p.m. Immediately after the press conference, the electric beer tankers started supplying the cafes and restaurants again. After a closure of more than a month, they ensure that there is sufficient beer in stock, so that the catering industry can resume turnover.

In August 2020 it was announced that all Heineken beer for the Dutch market will from now on be brewed 100% green. The fact that making beer transport more sustainable has now been added is a great milestone and a prelude to even more clean kilometers, says Carl van der Wielen, tank beer manager at Heineken Netherlands. “We consciously opt for green business operations and green logistics. Our inland vessels sail fully electrically and we have been driving trucks with solar panels and battery packs for a long time. In addition, we conform to the Green Deal Zero Emission City Logistics. As of January 1, 2025, 57 Dutch municipalities will introduce zero emission zones in their city center and surrounding neighbourhoods. This means that only zero-emission trucks and delivery vans will soon be allowed to enter these zones. We are already sorting for this with our electric beer tankers, for example. In addition, the new beer tankers are perfectly in line with the new policy of the Municipality of Amsterdam to keep out heavy and polluting traffic in the city centre, improve the quality of life and road safety and prevent overload and further damage to bridges and quay walls. With a maximum of 7.5 tons, the new tankers are a lot lighter than their predecessors.”

Instead of waiting until five to twelve, Heineken already wants to learn from the new way of supplying beer in Dutch city centers, emphasizes Van der Wielen. “But also the new way of planning. After all, charging with a (fast) charger takes considerably longer than refueling with diesel. The range of the electric beer tankers is also shorter. Nevertheless, we must be able to supply all cafes in the city center within the window time of 07:00 to 11:00.”

In order to achieve an optimum in reliability, (battery) capacity and weight reduction, Heineken has sought cooperation with Duotank. This Walloon company has been developing, producing and installing complete beer tank systems for more than 35 years, whereby the beer quality is maintained from the brewery to the glass. From tank to truck and including associated beer bags (inliners), beer hoses, compressors, coolers, flow meters, et cetera. “We produce beer tanks for customers all over the world,” says Mark Kleuskens, Automation Manager at Duotank Group BV. “Thanks to the inliner in our tanks, the fine aromas of the beer are better preserved. This is partly because there is no longer any CO2 pressure involved in the tapping process, but normal compressed air. In addition, exposure to oxygen is prevented.” While beer kegs are often delivered with a pallet truck, a beer tank truck is needed to fill (basement) beer tanks, he says. Duotank has developed and built various types of vehicles for this purpose. Also for Heineken. “In recent years we have built no fewer than ten beer tankers for Heineken. We were also one of the founders of the very first 100% electric beer tankers.”

In order to comply with the new weight restriction in Amsterdam, Duotank and Heineken took a critical look at every part of the beer tanker, says Kleuskens. “We also looked closely at the ergonomics. How can drivers deliver in the city center as efficiently as possible? How can we keep the lead time per café as short as possible? And how do we prevent the tankers from blocking the flow of other traffic? These and other questions led to the development of a new and lighter beer hose, as well as an optimization of the beer hose reel and compressor. We also paid a lot of attention to the energy supply for the delivery. An air compressor and beer pump have been installed on the beer tankers, which must be supplied with 230 Volts.” Van der Wielen: “Thanks to a mobile and off-grid energy system, our drivers can deliver fully autonomous tank beer anytime, anywhere. They no longer have to unroll and rewind their reel at every café. They also no longer have to search for a free socket. Rolling out the beer hose is enough to fill the beer tanks.”

For the energy supply, Duotank contacted Top Systems, which has already developed and supplied various energy systems for the existing fleet of Duotank and Heineken. “The tanker we use for the beer delivery in the center of Amsterdam is the FUSO eCanter from Mercedes-Benz Trucks,” says Kleuskens. “This tanker has a lithium-ion battery pack with a maximum voltage of 420 Volts for the electric drive, as well as a 12 Volt battery to power the lighting, central locking and windscreen wipers. Mercedes-Benz made it very clear in its specifications that we were not allowed to overload the battery system. Moreover, we had to deal with preconditions, for example with regard to the maximum amount of energy that we can take with us. Due to weight restrictions and comfort considerations, we also looked for a solution to charge the tankers and the energy system for the air compressor and beer pump with one cable.”

“Together with sector specialist Norman Heins, I investigated the options for the energy system,” says Kleuskens. “During driving and charging the main batteries, the 12 Volt battery of the FUSO eCanter is also charged. For this, the beer tanker has a DC/DC converter of 200 Ampere, of which we are allowed to use 100 Ampere to charge the energy system of Top Systems during loading and driving. We have analyzed how much time it takes us to drive from the edge of the city to the various cafes. But also how much energy is needed for each delivery. Based on this, we looked for the ideal balance between the energy you use to deliver beer and the energy you get back when charging and driving.” Heins: “Based on these calculations, three Relion RB100-LT lithium-ion batteries of 100 Ah each were chosen. These batteries have a built-in heating system, so that they can be safely charged with a standard charger even at low outside temperatures (down to -20 °C). The batteries are connected to the FUSO eCanter using a 100 Ampere TS1600C DC/DC converter, which always indicates when we can charge 100 Ampere. A Victron Multiplus inverter/charger (12/3000) converts the direct current (DC) of the Relion lithium-ion batteries into 230 Volt (AC) alternating current for the air compressor and beer pump. The energy storage system is intuitively monitored and controlled by a Victron Color Control GX, while a SmartShunt monitors the capacity of the batteries.”

Two solar panels have been installed on the roof of the beer tankers; one on the cabin and one on the so-called ‘delivery box’, according to Heins. “A Victron SmartSolar MPPT solar charge controller (100/30) collects the generated solar energy and converts it to a nominal voltage of 12 Volts for the inverter and battery pack.” Installing the energy system in the beer tankers was quite a puzzle, Kleuskens emphasizes. “Because where could we store all the components? And what did this mean for the cabling? Top Systems has also provided very good support for this. The three batteries were eventually installed throughout the truck, while the inverter, MPPT solar charge controller and other technologies were placed in the control panel.”

A large truck with 20,000 liters of fresh Heineken beer is currently driving from the Heineken brewery in Den Bosch to the outskirts of the city. There, 3,000 liters of beer are always pumped over to the 100% electric beer tankers, which provide approximately five cafes with fresh tank beer in a whisper-quiet and emission-free manner. Thanks to this mobile city hub and the electric beer tankers, Heineken is reducing the CO2 emissions of the entire transport from the brewery by more than 40%.

Within the next six months, the number of electric beer tankers will be expanded to six, says Van der Wielen. “From that moment on, we can also supply other brands of beer, such as Amstel, Brand or Birra Moretti, 100% electrically. This is partly because the 3,000 liter tanks are interchangeable. Moreover, we then have sufficient capacity to supply all Amsterdam cafes seven days a week.” All beer tankers will run two to three shifts per day. Kleuskens: “To clean the beer tankers, we also built a mobile cleaning truck with (waste) water and chemical tanks. This cleaning truck is also equipped with an autonomous energy system from Top Systems, with four Pylontech US2000+ (48V/200Ah) batteries, a Victron MultiPlus 48/3000/35-16 inverter/battery charger and a SmartSolar MPPT 250/60-MC4 solar charge controller. ”

Sustainable, efficient and an even better taste

Following the characteristic Heineken beer tankers, neutral beer tankers are currently being built, with a white car and a tank in the appearance of the specific beer brand. Make changes can easily be made on these cars. Kleuskens: “We are also working hard on a solution that will soon make it unnecessary to refuel beer. Instead, the tanks will soon be filled at the brewery and transported to the outskirts of the city in a large trailer. There they are exchanged with the aid of a forklift on the beer tankers. This process is not only faster, but also results in an even better taste. Sustainability, efficiency and quality will soon go hand in hand.”